We all know that football is a big deal here in Texas. High school football is a major event that brings communities together and keeps students focused on staying in school. It attracts people from all different ages and genders, and it's something that is rooted deeply in the Texan lifestyle.

College football is similar to the high school football experience, but it's even more intense. With so many colleges here in Texas that have strong football programs, it could even be said that it's followed more intently than pro football. The $744 average transaction price of a ticket to the A&M vs Alabama game makes this a viable argument (it also makes it the most expensive college football ticket of 2013).

So Texans love football, but with so many teams to keep up with, accidentally missing games is an unfortunate possibility. Thankfully, there are websites such as MaxPreps and ESPN that can keep us organized and informed on when our favorite teams play. So from everyone at TWT, we wish you a happy football season! 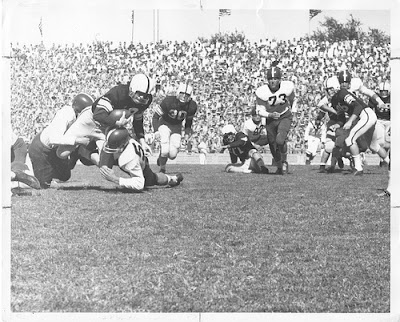 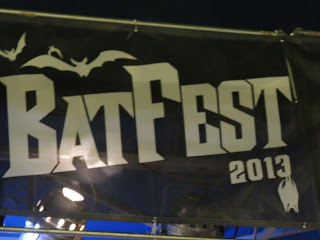 Austin is a city in Texas that is full of fun entertaining things to do at any day of the week. The ninth annual Bat Fest was this past weekend's main attraction for locals and visitors. 1.5 million Mexican free-tailed bats emerge from under one of Austin's bridges at dusk. 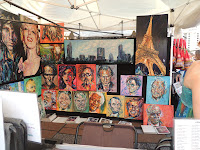 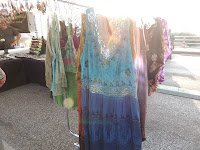 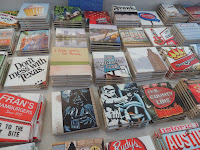 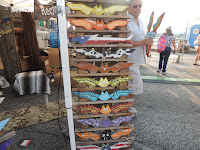 Over 75 arts & craft vendors were in attendance displaying all sorts of  local artists, fashion sellers, and various other vendors that welcomed the city of Austin's most artistic. Almost all of the artists or private vendors were from Austin or very close. The city is very well known for supporting local artists and even local food and their most popular non-chain restaurants throughout the area.

Many of the booths includes coasters that were customized to be identifiable with your favorite Austin experiance or place with icons like popular graffiti in the area and the city's most famous food trucks and pit stops. 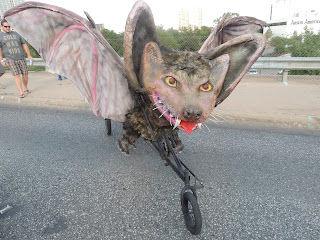 The Bat Fest also included what they call the Bike Zoo which was a new attraction this year. Biking is one of the most popular recreational activities in Austin. Probably the two most popular things in Austin, being weird and riding bikes come together to form a bat bicycle brought to you by the most creative depths of Texas. 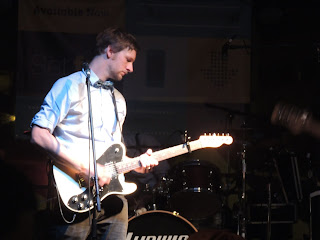 One of our favorite local bands played at the Bat Fest. The Quiet Company was noticed by Tumbleweed Texstyles in Marfa for Viva Big Bend earlier in the summer. We made sure to check them out again at the Bat Fest and of course they were better than ever! Of course the Quiet Company never disappoints the crowd either with their unique musical additions and overall style. Be sure to check them out as soon as you can, their music is well worth it.

At around 8 or so, when the sky slowly started dimming into dusk bats broke through the crevasses of the bridge wildly and dived out from under the bridge smoothly and fiercely, not one ever bumping into another. The sheer quantity that spilled from the cracks of their concrete home was almost only believable if you could see them for yourself. 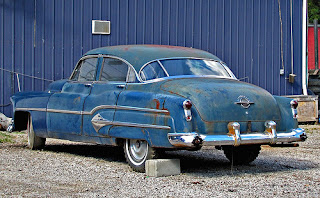 Texas’ rich culture can be seen in many aspects of Texas life. The food, the music, and the overall lifestyle in Texas are all enriched by the history of this great state. Texas has long been a place where communities form with members from different parts of the U.S., and even different parts of the world. This rich diversity is very much prominent in one of Texas’ greatest traditions: the antique market / flea market. This is where pieces from different generations and different areas of the globe come together and tell a story about where they came from, and how they ended up in the Lone Star State.

There are many antique markets all across Texas. Some smaller local events are monthly, and some larger events are semiannual. One great market that is well worth the look is the Antique Alley Texas. This semiannual event takes place across 37 miles of scenic and quaint country roads about 35 miles south of Fort Worth. It spans four towns including Grandview, Itasca, Maypearl, and Cleburne. There is enough in this Texas sized event to keep you entertained for an entire weekend and more. There are traditional antiques for sale as well as great food, art, and even classic automobiles. You can drive along the highway and stop at various stands along the 37 miles. There is truly something for everyone, and you never know what you will find, or what interesting story the pieces around may have. Mark your calendars and bring a friend with a truck, the next two shows take place September 20-22, and April 18-20. 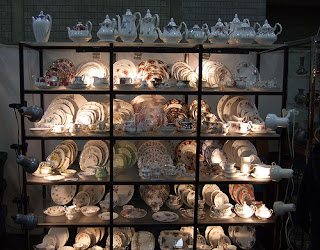 1) Dazed and Confused - IMDB >>
The adventures of incoming high school and junior high students on the last day of school, in May of 1976.  imdb >>

What BBQ line do you know that starts at 6:30am on a Saturday morning? If you guessed the unmistakable Franklin BBQ in Austin you correct! We didn't get there at 6:30 in the morning however. We arrived to contribute to the ever growing line at around 8:20 that morning and discovered that once Franklin opened at 11am we would have about an hour wait ahead of us but we were pretty much guaranteed the best BBQ you could find.


At around 9 in the morning Franklin BBQ associates would let us know about how long the wait would be and took estimated orders to insure the amount of meat being served would be enough. Sitting on the concrete in the early hours wasn't bad to start because the Texas heat takes a break from causing heat strokes in the mornings. But once 10:01am came around the corner so did the unforgivable Texas heat, but we were fully prepared and brought umbrellas and refreshments because we knew what to expect. Others opted to find additional shelter from the unforgivable Texas sun posted up near parked cars because the line went through and around the parking lot. Now Franklin BBQ doesn't open until 11am and it closes whenever they are completely sold out of products, at this time a sign that no one want to see is displayed in the window.

The associates are efficient and provide the best customer service even before the doors open. A couple of times before the doors opened a associate would walk down the line selling $2 Lone stars and $3 local beers including Shiner beers as well as a variety of different refreshments which were also available for cash purchase.

During our wait we counted about 5 huge BBQ pits that were parked behind the establishment. Old school country music filled the tin shade top just about an hour before opening that correlated perfectly with the environment of the restaurant. Aaron Franklin himself was spotted sporting our Texas BBQ shirt! We were lucky enough to snag a quick picture of him.

4 Tipsy Texans and 1 lb of brisket later we had our fill of Austin's most prided BBQ joint! Whenever
you are in town be sure to stop by Franklin BBQ. If you love barbecue as much as we do we guarantee you wont regret it. 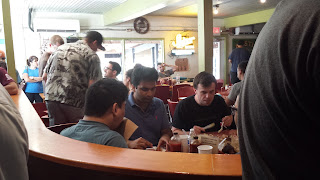 
Actors and Actresses Made in Texas:

More actors and actresses from the Great state of Texas >> 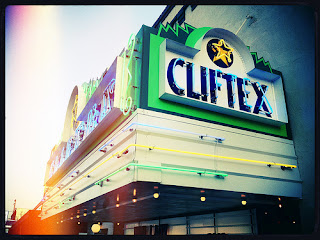 The movie theater has long been an American staple. The movies offer an escape from the stresses of everyday life, and during summer they allow one to get away from the hot Texas sun and cool down with an iced soda. The movie theater has evolved as time has passed since they have gotten bigger, more complex, and more expensive. These modern theaters are a great feat of modern engineering, but they also lack much of the character of the theaters from yesteryear.

The Cliftex, located in Clifton, Texas, is the oldest continuously operating movie theater in Texas. Opened to the public in 1916, it offers a throwback to simpler times. The cinema plays a single movie at one time since there is only one screen in the theater. Admission is affordably priced, and five dollars will buy you popcorn and a drink. The interior and exterior of Cliftex reflects its rich, nearly century long history with many original art deco features. Interestingly, Cliftex still embraces the use of intermission in their showings. Before April 2011, 35 mm film was still in use at Cliftex, and therefore intermission was necessary for reel film changes. Although 35 mm film is no longer used today, the tradition of intermission is still maintained.

This charismatic movie theater keeps many Texas and cinematic traditions alive and accessible to the public. Located only about 45 minutes from Waco, it is well worth a trip down to Clifton to get a genuine 20th century small town Texas cinema experience.

We are Texans. You know what that means? We love GREAT food and we love salsa! It's true but many times Texans get caught up in the many faces of fried food art. Healthy choices are often compromised for flavor. Here is a super easy recipe that anyone can do and enjoy virtually guilt-free.

Pico de Gallo is super easy and it is where health and satisfaction harmonize. 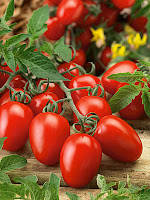 6 Diced Roma Tomatoes (If you are making a lot) 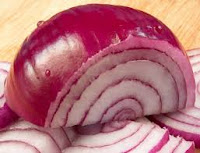 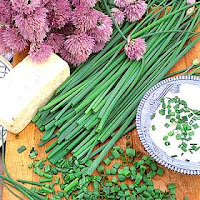 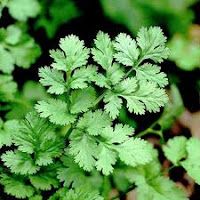 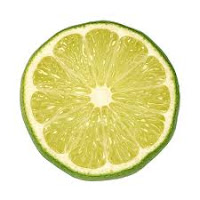 
Salt and Pepper to taste

Mix and enjoy! If you want to keep the healthy motif going then replace those corn chips with some Beanitos. Gluten free bean chips! 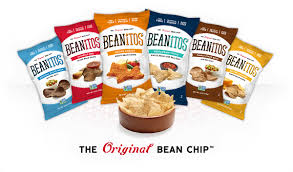 Texas is best known for its wide open spaces, unique culture, and amazing food, but what about technology? Texas is obviously technology forward as evidenced by the large number of tech companies that call the Lone Star State home such as Dell, Texas Instruments, and AT&T. What is less talked about in terms of technology in Texas is the entertainment side of technology. Take video games for example, the article “Four Video Games You Might Not Realize were Made in Dallas” from The Dallas Observer might surprise you.


See if you recognize any of these titles that were created thanks to input from Dallas based companies.

Picture this scenario; you’re by the pool on a beautiful summer’s evening, enjoying good food in the company of your friends, when all of a sudden, a group of 5,000 birds flies overhead. That would be a pretty incredible sight wouldn't it? Well now lets take that and adjust it fit the “everything is bigger in Texas” motto. How about seeing between 750,000 and 1,500,000 bats fly above the Colorado River? Now that’s more like it.

One of Austin’s biggest attractions that you must check out is the bat flight on Congress Avenue. Around sunset between the months of April and October, hundreds of thousands of Mexican free-tailed bats emerge from the Ann W. Richards Congress Avenue bridge in search of a meal. They are extremely interesting animals that are generally not well understood. For example, we’ve all heard the phrase “blind as a bat”, but believe it or not, bats actually have remarkably good vision.These amazing mammals, and yes they are mammals, not birds, are now a staple of Austin, and by seeing them in action, we can truly appreciate how wonderful they are. 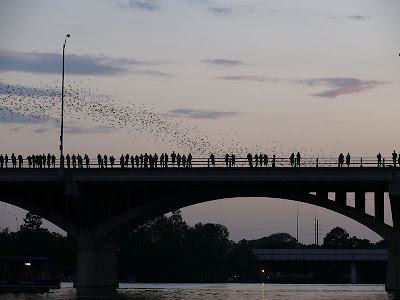