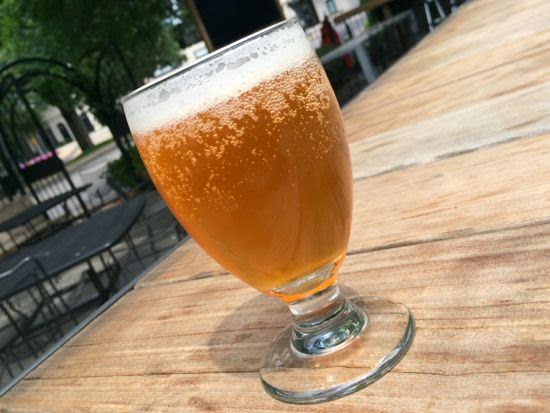 In sports, it's World Cup time again as Brazil plays host to the 2014 soccer championship this summer. Media everywhere are attempting to be current and topical as they tie content to this event, the athletic competition or to thehost nation in general. Unfortunately, for craft beer this usually means some stale coverage of Brazil's Xingu dark lager, a decent but unremarkable import now found almost anywhere in Texas.
However, Peticolas Brewing has saved us from this fate by brewing a new beer specifically for the World Cup, the Thrilla in Brazilla. It was officially released on the first day of the contest for the Brazil vs. Croatia game, and early access was heavily tied to pubs showing and celebrating the opening match. This should surprise nobody as Michael Peticolas personally oozes soccer fandom from his pores.
The Thrilla in Brazilla is a light blonde/gold American-styleIPA with a thin head but good lacing down the glass. The aroma provides some preview of the taste with dry, floral hops, and the flavor follows suit with light blonde malt and more earthy, grassy hops on top of the more familiar citrus. As usual for Peticolas, the not unpleasant bitterness is very well-balanced with a tiny malt sweetness and a more dry, lingering floral finish.
At a more traditional 7.5% ABV and 75 IBUs, Thrilla is a much more approachable and sessionable beer than his potent Sit Down or I'll Sit You Down. This is the IPA Peticolas should be making year-round, not just to round out his standard portfolio of beers but because it would fit well into the developing landscape of Dallas IPAs. Thrilla contrasts well with Deep Ellum's full, robust IPA and Community's fruity, citrusy Mosaic, showcasing the more bitter and dry side of the hops spectrum.
With its bitter balance, Thrilla would pair well with heavy foods like steaks, burgers or anything from the grill to cut through those rich flavors. It's almost light enough to be called a summer beer, and should be enjoyed long past World Cup season.
Cheers!paul@scientist.comtwitter.com/craftbeerusa